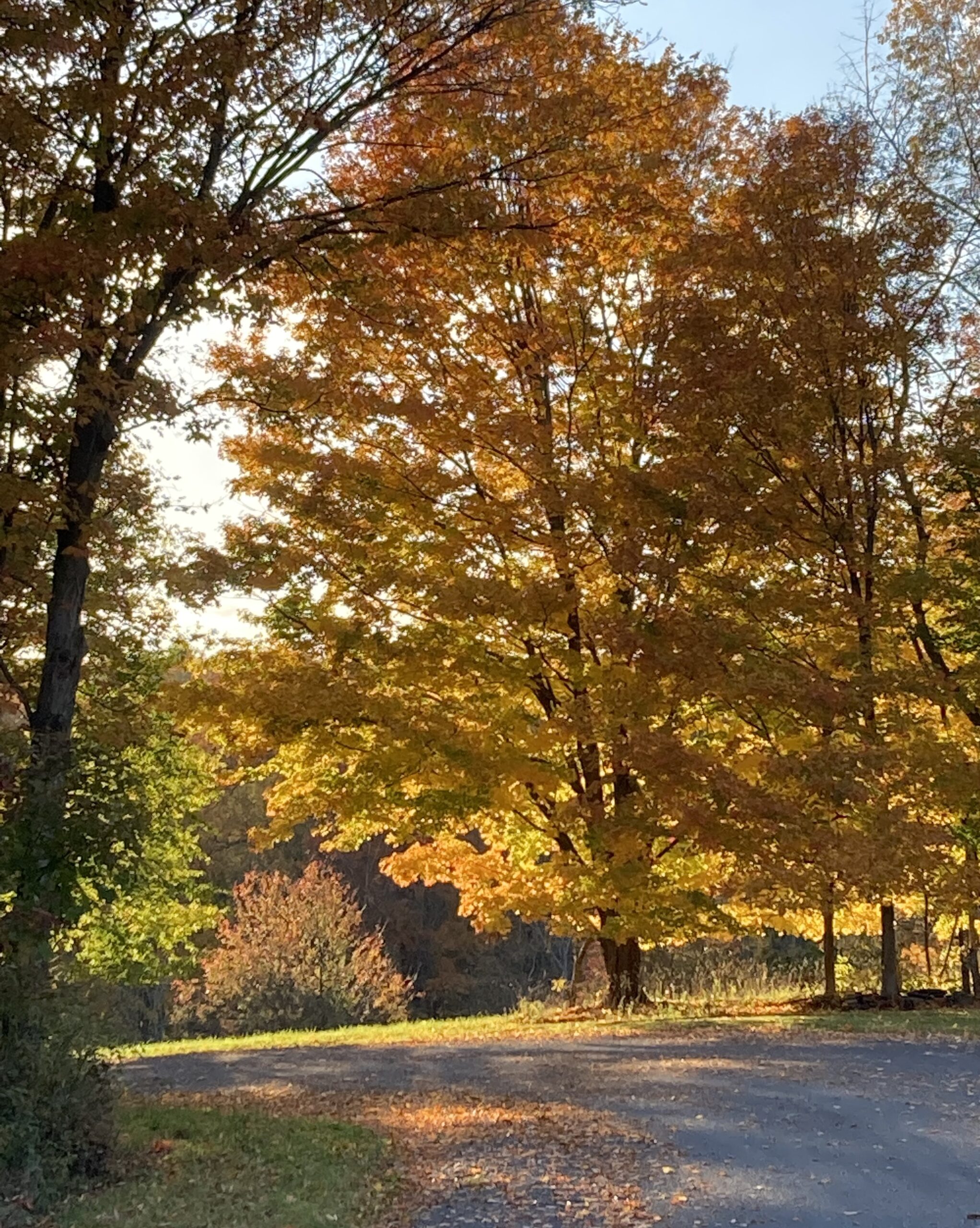 I look outside the window right now and see maple trees with orange and reddish yellow leaves reaching into a tender blue sky. And lower down, green leaves, with burnt red Virginia creeper clinging to maples all cabled together with grape vines. And lower still, deutzia and lilac and honeysuckle.

But just five hours ago, none of this. The moon was out, and the night was day. After waking up unexpectedly at 5 am, I looked out a window and didn’t know what year or millennia it was. There before me was something ancient. The trees and bushes were all constituted of shadows, timeless shadows. And the rest was silvered by a unique light, a softened glow.

During the day, we see the ten thousand things of the world distinguished by specific details and the spaces between them. But in the moonlight, the edges grew fainter. There was light and shadow, but nothing else sharply divided or defined. Everything was softened and somehow linked. Nothing stood on its own; the whole scene was so engrossing. And the moonlight made mind light, made all my thoughts and feelings, so noticeable.

And then this morning I picked up a book I had been reading a week or so ago, Hunger Mountain: A field Guide to Mind and Landscape by David Hinton. It describes walks he had taken on Hunger Mountain in Vermont and includes discussions both of Chinese poetry he had translated and of Taoist cosmology inspiring those walks.

In the first chapter of the book was a poem I had read before; it was by the Chinese poet, Tu Fu, titled “Moonrise”. I read again about the new moon, and the ancient, changeless “Star River” and “White/dew dusts the courtyard.” And I realized that last night it was Tu Fu looking out my window.

We normally think of things at a distance. Words can do that. They are abstractions, usually. And we are the distance the words create, or what distances. We think of ourselves in a manner that separates us from whom we speak to or about. We all have thoughts, plans, dreams, sensations, emotions filling our mind and heart. The ego self is what glues us to some of these stimuli and excludes us from the rest.

Many people would argue that it wasn’t Tu Fu looking out the window. He’s dead. It was just that my buried memory of the poem influenced how I interpreted the moonlight I perceived and how I saw the earth, trees, and bushes. I was clearly in a dream intoxicated state. But last night, a different vision occurred. The moon met and befriended the poet. For a second or two, the thing seen met the act of seeing and became the seer…

*To read the whole piece, please go to The Good Man Project.