A Mindful Use of Digital Media

There has been much debate about the role cell phones and other digital media has played in making face-to-face in-school discussions more difficult in the last few years. A teacher and former colleague recently told me that students even use their phones to order food to be delivered to the classroom. When I asked why she put up with it, she said she couldn’t do anything about it. It was too engrained in the school (and national) culture. She said parents added to the problem by wanting 24/7 access to their children.

I was as frightened by this situation as my former colleagues were. How can anyone learn well, and engage with others in meaningful discussions, when their attention is tuned to the expectation of a text?

In our world today, we are all bombarded with messages to keep up with the latest technology. The ping of the cell phone is an affirmation that we are valued and important. So, especially for young people who grow up with digital media, being disconnected means being less valuable. They fear what they might miss (FOMO), even to the extent of keeping their phones with them at night, which can interfere with sleep and contribute to anxiety, depression and possibly narcissism.This serves the interest of big corporations whose primary interest is in turning children into malleable consumers; it does not serve the interests of educators and parents interested in their children becoming clear thinking adults.

Adults can be as addicted to their devices as children. Ask yourself:

How much time do you spend on your phone, computer, and social media?

Who do you prioritize: the person standing before you, or the one on the phone? 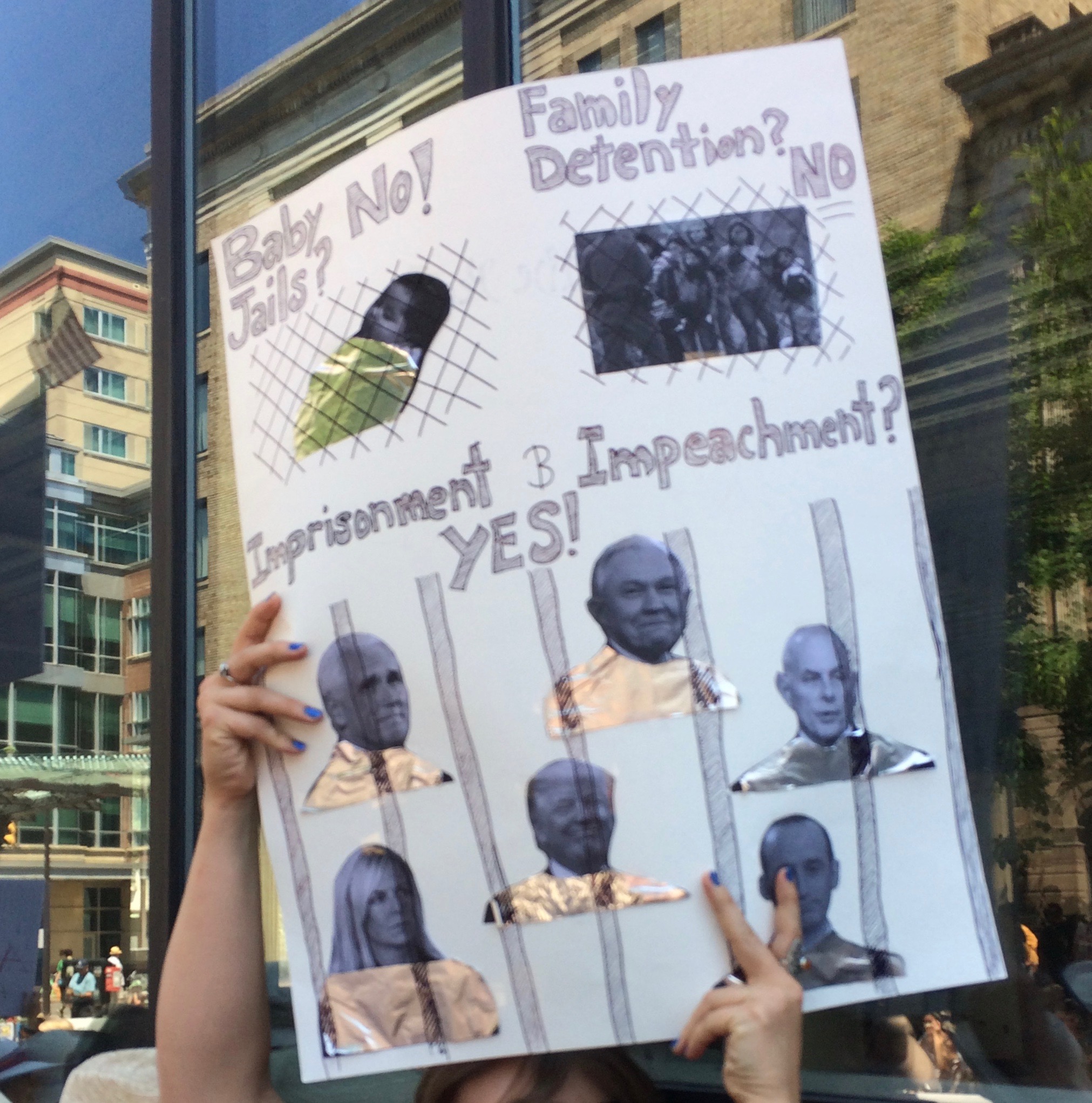 Who Leaked What and Why?

I find it funny when I hear people ask why Russia would want to interfere in our elections. Isn’t it obvious? It is not just to put Trumpf in power so he could honor an agreement with Putin to remove the sanctions the US placed on them. It is to crash our whole political system. To isolate us from other nations and undermine our power and what’s left of democracy. This is not the old cold war revivified. It is a new species of conflict. It’s not a battle so much of armies but of information, of insight versus self-deceit, or agency versus pacifity.

Right now, our government is broken. And what happened this past week has just highlighted the whole situation.

The New York Times article, about Deputy Attorney General Rod Rosenstein speaking with members of the FBI and others about the possibility of wearing a hidden microphone to record the President, exemplifies what has happened to our government and news media. The information was leaked to the Times by unnamed sources. How do we hear that news?

The differences in coverage (of the NYT’s coverage) of this story are striking. When I first heard the story on CNN and other media, what was emphasized in the story, in my opinion, was that Rosenstein spoke to others about secretly recording the president. I thought their coverage (hopefully unintentionally) fed the Trump narrative of a there being conspiracy against him.

The Washington Post and David Corn of MSNBC and the Huffington Post discussed the news differently. They cited several sources, people who were actually in the room when Rosenstein’s comment was made, who said the comment was sarcastic. It was not something Rosenstein really intended to do (or ever did). People are allowed to talk with others about what action is appropriate. These sources go on to stress the whole context in which the comment was made—which was after Comey was fired. Their focus was on the chaos in the White House and people in government trying to figure out what to do about it. I focused in the article on what Rosenstein’s state of mind was working for the DOJ in this time.

According to the article in the NYT, Rosenstein said “The New York Times’s story is inaccurate and factually incorrect. …I will not further comment on a story based on anonymous sources who are obviously biased against the department and are advancing their own personal agenda.”

So, who leaked this information? And what was the purpose of the leak? Right wing media in general immediately called for the firing of Rosenstein (although even Fox News soon had some doubts about the facts of what Rosenstein did and if Trumpf should fire him).

The NYT which has, of late, been so crucial in the fight to hold Trumpf accountable, to reveal his lies and the dangers he represents, may have now given him and his allies the excuse they dreamed of (or conspired to achieve?) to fire Rosenstein, appoint a lackey to oversee or end the Mueller Investigation, and try to destroy what’s left of our democracy. It certainly has distracted many people from the revelations about Cohen and Manafort and the threat they present to Trumpf.

The two main parties of our government are almost at arms with each other. Will Russia be the ultimate winner of the battle? Or will this newest conflict lead to the impeachment of the President for obstruction of justice, collusion, etc., etc.? I hope we all vote in November, as well as do all we can until then to fight for the resurrection of our rights and the protections that government should afford us instead of take from us. We can’t afford to lose.

**I called the NYT comment line and shared some of what I wrote above. Maybe you could call and do the same? (844-698-6397) In the past 2 years, The NYT has been crucial in terms of holding Trumpf accountable and limiting his attempts to undermine democracy. The article on the comments by Rosenstein does the opposite. It provides Trumpf with the excuse to fire Rosenstein and further undermine the rule of law in this country. Any possible good served by the value of the information, if accurate, was undermined by the possible consequences. I hope you can publish an article, by Thursday, that reveals something that will stay T’s hand—or maybe how you were duped. And how Rosenstein should not resign.

To Keep Love Alive, Know How Love Is Born

We all want to be loved, so it is no surprise that so many blogs, so much art, so many movies, plays and novels have been written or created about it. And no surprise that so many of us want to understand how to have a good relationship or keep love alive. When someone says to us, “I love you” or we say it to someone else, it is a pivotal moment in our lives.

When we feel loved, we can feel we have “made it.” We might feel not only that “life is good” but “I am good.” What we yearned for has been found. We feel whole.

But to keep love alive it’s important to know how love is born. When we look within our self and study how the emotion is constructed, we see that love, like any emotion, is not just one overwhelming entity. It involves so much of who we are. It is feeling and sensation mixed with memory, thoughts and how we view the world and ourselves.

If we think of the other person as the source of our love, all kinds of craziness can ensue. We can think our happiness lies in someone else’s hands and we are powerless—or that this other being exists entirely for us. We can feel so overwhelmed by our attraction for the other person that there is little room left for the reality of that person.

This is why love can turn to anger, possessiveness, even violence. We come to see the other only in terms of how he or she fulfills our image of whom they should be, and we never see who they are….

In the locker room of the gym yesterday, three men changing their clothes near to me were talking about incidents of road rage and random anger they had witnessed. They were upset about how the mood on the street had changed since the last election. I could easily relate to the discussion and was relieved they seemed to be on “my side” of the political divide. But the remarkable thing was that on previous days I had felt suspicious of two of the three men. They had looked angry to me, aggressive, not on my side at all. Taking sides means sides to stay away from.

When politics gets as divisive as it is now, it reaches into almost every aspect of our lives. It’s not just online and newspapers, television and radio. It is on the street, in the gym, work, and travel. We don’t know from what side of the borderline of hate and division the driver of the car next to us might be or the person on the check out line behind us—or the policeman standing at the street corner. Hate and suspicion are contagious. This is one reason the level of anxiety and depression amongst college and k-12 students is at all-time highs.

And this is obviously not the first time the U. S. has been so divided. Think of the Civil War, the revolution, the suffrage, civil rights, and anti-war movements, etc. I grew up in the 1950s and 60s. Back then I was under the illusion I could discern sides by looking at the length of hair, the clothing, the age, and facial expression. All such illusions are shattered now, although sloganed t-shirts and confederate or Nazis flags speak all too clearly.

In December 1970, after vacationing in Berkeley, California, I had to return home to New York City. I didn’t have much money so I arranged for a drive-away car. It was easy to get such cars back then. In exchange for driving someone’s vehicle to their home for them, I could receive free transportation.  An Englishman I had met in a theatre workshop, who I will call Adam, was going to share the ride with me.

Adam had met a woman, Nancy, and she wanted to go east with us. That was fine with me. What wasn’t fine was that Adam had developed a drug dependency. He had been on speed and other drugs for weeks. I told him we could only travel together if he stopped using. No drugs were allowed in the car.  He agreed.

We left a few days after our talk. I started the driving. It was winter and a storm was forecast for that night so we had to get across the Rockies before the snows began. We drove south towards LA before turning east….

To read the whole story/personal essay, go to Heart and Humanity magazine, which published this piece.