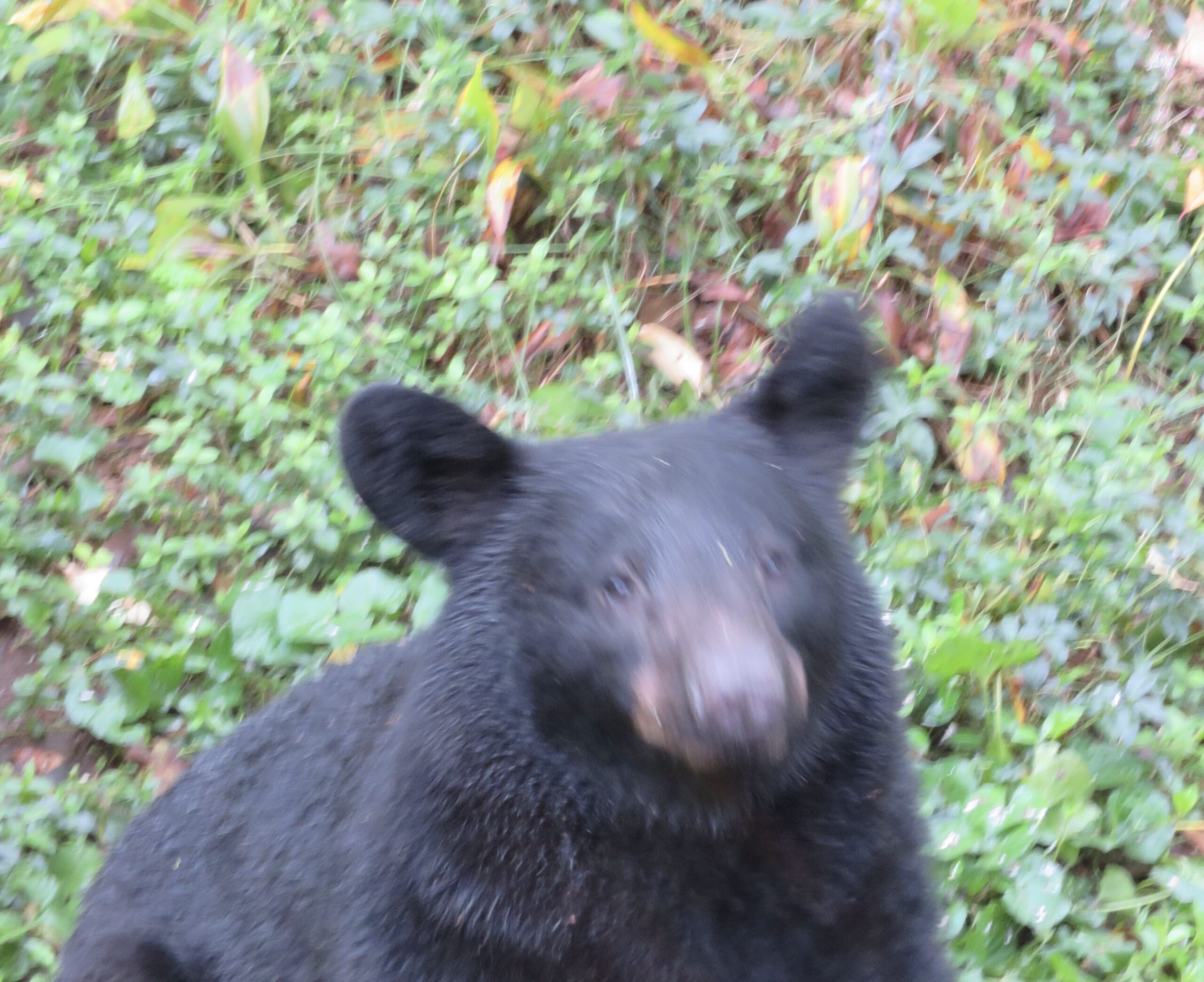 It’s been eight to ten days of “firsts.” Last week, we woke up to find a hawk, with a bleeding chipmunk in its claws, sitting on a branch of the old apple tree outside the front door. That was a first.

A few days later, after midnight, a raccoon came in the second-floor cat window to the bedroom. We only knew it was there because one of our cats stood up on the bed and loudly hissed, waking us up. My wife and I got up and yelled at the coon. It climbed back out the window and we ran out the front door pursuing it, trying to frighten it enough so it wouldn’t return

The most dramatic and surprising visitor was the bear. Black bears are not unknown to the area. We had bird-feeders destroyed by bears in the past but only saw the mangled feeders left behind. But at 8:15 am this morning, with the sun shining behind it, we saw a bear cuddling a bird-feeder in the yard of our house.

Years ago, I had had nightmares about bears breaking into the house. And here one was, walking toward the apple tree where the hawk had rested just a few days earlier, and where the bird feeder had once rested. No nightmare, just fascination. All I thought about was preserving the moment, finding the camera, and taking pictures. I went from window to window looking for good angles for photos.

The bear seemed so soft when I studied it, so— not human, yet not that different. A cousin in the animal world and a fellow mammal. It had an inquisitive face and wasn’t afraid to look up at the window where I stood with the camera. It was driven more by thirst for food, for seeds dropped by birds from the feeder, then by watching us.

But when it walked right up to the front door, stood up on its hind legs, and reached out as if to knock on the door or knock out the window⎼ everything changed. My wife started shouting at it and banged her fists against the wall. I ran out the side door with 2 metal bars and started hitting them together making a wonderful clanging sound. The bear disappeared so fast we didn’t perceive where it went. It was like it was never here⎼ except for the photos, memories, and mangled bird-feeder. Too bad we didn’t take a picture of it at the door.

What should we make of this event? Clearly, the human and non-human are meeting more often than expected, not that the human world was ever separate from the rest of nature. But we humans are spreading everywhere. The realms where non-humans could live without our interference are getting smaller and rarer.

Many primatologists, zoologists and others have speculated that wild creatures like bears live immersed in the world of trees, bees, rivers, fish, rain, as well as other bears, just like we are immersed in sunshine, buildings, cars, technology, religions, politics, history, and other humans. Their world is one of more direct sensation. Ours, more abstracted, languaged, filled with our human imagination and thus with time, plans, and worries.

So, what happens when a bear lives so close to humans? Does it develop worries? Does it suddenly want to wear a watch and listen to the weather report? …