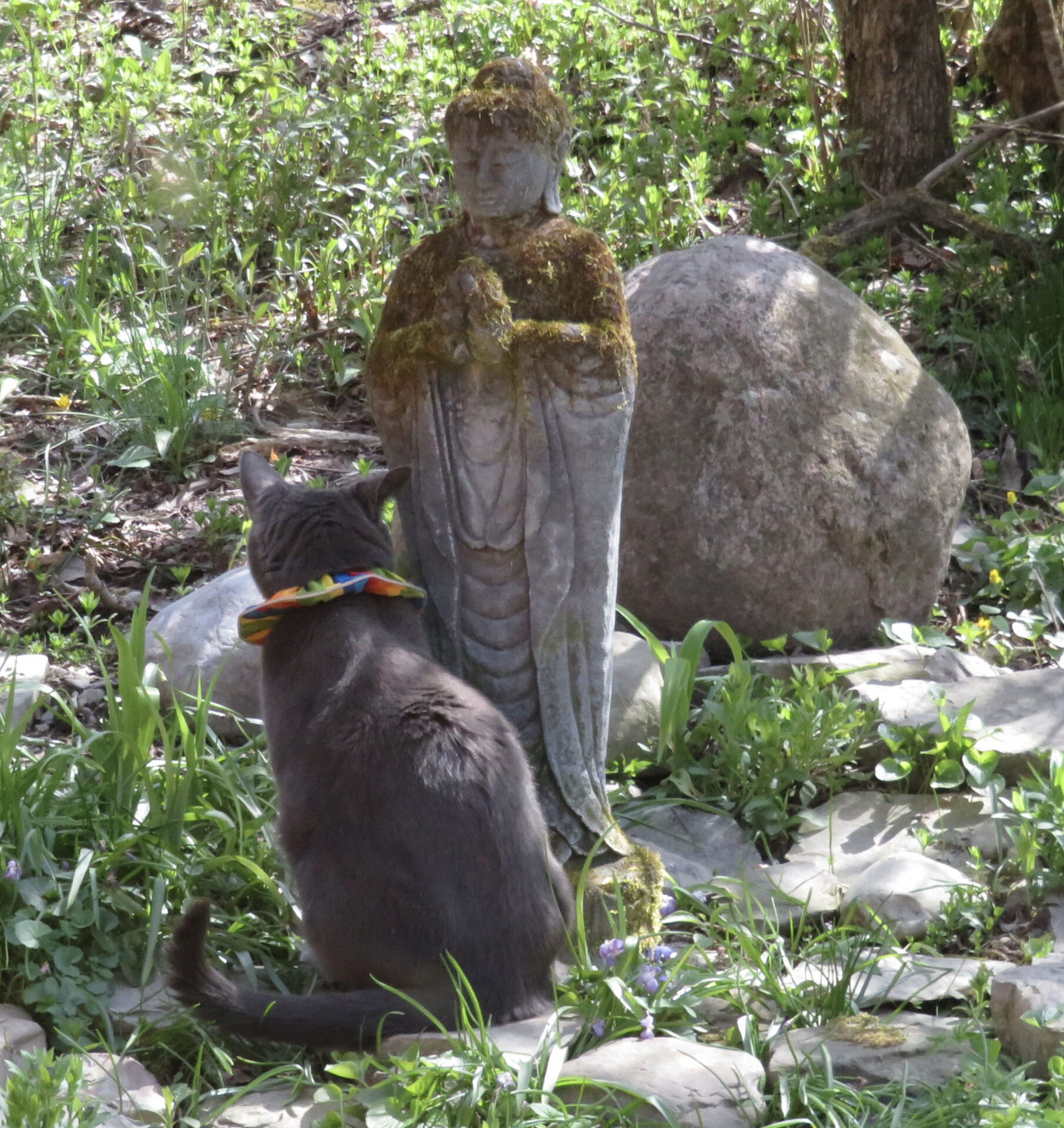 One evening a few weeks ago, I was sitting in the living room with my wife, talking, and suddenly heard a sharp cry. Something was rushing outside, on the roof and by the front door. I thought maybe it was racoons, as in the past one had tried to tear out a screen in the upstairs bedroom window to enter the house. So, I jumped up, found a flashlight, and raced out the door.

I didn’t see anything, at first. But then there was a rustling sound around the corner of the building, in the flowers along the uphill side of the house. I shined the flashlight there and saw an adult racoon and yelled at it to leave. It took off up the hill.

Then a whimpering sound came from further in the flowers. I approached cautiously closer and saw a young racoon staring at me. But it wasn’t alone. It was wrapped around another, even smaller racoon, maybe a brother or sister, who had buried its head in its sibling’s stomach. Had the smaller racoon fallen off the roof and hurt itself?

All my anger vanished. This young animal had stayed where it was, silently protecting and comforting its crying sibling. Suddenly, I didn’t know what to do. I wanted to help but didn’t know how. My wife, who had followed me outside, said we should leave. She was afraid staying around would discourage the mother from returning. So, we both left.

About fifteen minutes later, once again there was a noticeable rustling outside. The young racoons must have been led off by their mom. I went outside and saw they were gone.

In just a minute or two, I had gone from fear and anger of the coons getting in the house, to empathy, care, fear for the animal family. I realized how my expectations and interpretations of what was happening shaped my emotions and actions. And how universal, how instantaneous compassion can be, if it’s not drummed, traumatized, or oppressed out of us.

And the eruption of compassion helped me see straight or perceive more clearly.

But how do we live and keep ourselves safe if we readily feel compassion for others? Or maybe it’s the opposite? How can we feel safe if we’ve lost our compassion? When we wish others well, when we care, we are constantly greeted by care. We see it reflected in the eyes of others and are thus surrounded by it. When we hate, feel anger, or jealousy, then everywhere we go, we meet hate, anger, jealousy.

A good friend told me the story of a doctor he knew. The doctor lived and worked in New York City but was thinking of leaving the city and profession. He had recently treated a man with severe COVID who had not been vaccinated and who repeated disinformation denying the efficacy of the vaccine, denying the need to wear a mask for his own safety and that of others. And this was only one of several such patients. The doctor said he was losing his compassion. Losing his desire to help others in the face of those who were so closed off and whose lack of care was so toxic to themselves and others….