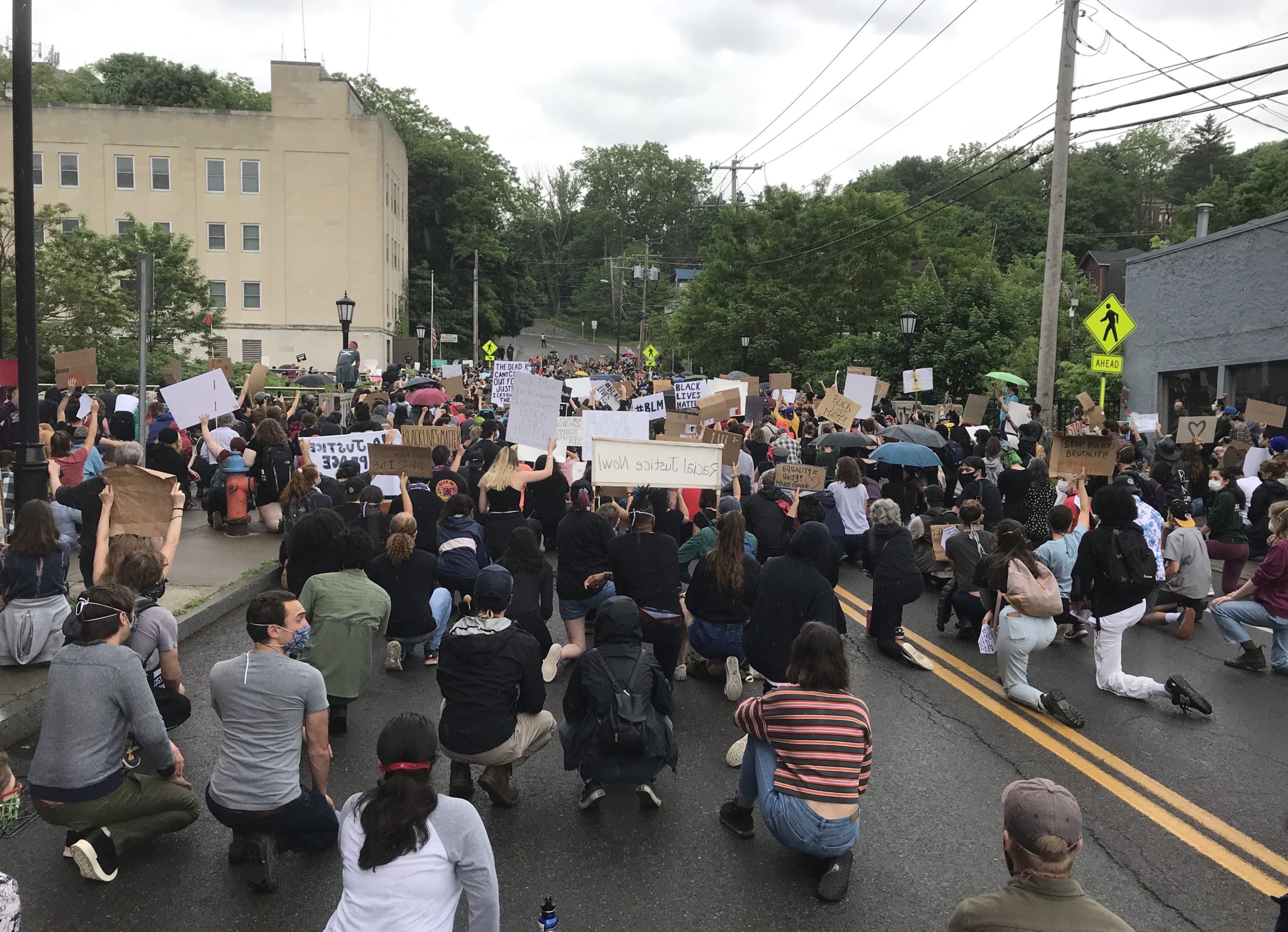 Maybe I’m crazy. Amidst the anger, fear and outrage I feel right now, there is hope.

I am white and I support Black Lives Matter. I support speaking out for justice and against the abuses of governmental power. I support not only the righteous anger but the compassion for others expressed by these demonstrations. Rev. Al Sharpton spoke about the collective pain in the African American community. There is too much pain in our nation right now and the only medicine for it is justice.

George Floyd was murdered last week, just about two months after another African-American, Breonna Taylor, was shot by police in her own home, and three months after Ahmaud Arbery was shot. It took three months before the murderers of Mr. Arbery were arrested.

All across the country protests began against this latest murder, largely peaceful protests, calling for justice. But then reports and videos of violence followed the demonstrations. Curfews were instigated, national guard activated. Chaos seemed to ensue in several cities.

This was frightening. Then photos were taken and shared, and peaceful Black protestors called out white instigators of that violence. It seemed these disrupters were mostly either thieves taking advantage of the protests to rip off businesses or white nationalists trying to discredit the demonstrations or instigate further violence. And one white man, a supporter of DT, drove a tractor-trailer into a huge crowd of protestors, evoking the image of a deadly attack by a terrorist driving a truck into a crowd of people in Nice, France, in 2016.

I feel outrage not only against the murder but that peaceful demonstrations could be twisted to serve the purposes of white nationalists and others, who represent the very deep social forces in this nation that have perpetrated violence against African-Americans and others in this country for years, since the beginning of this nation.

And in the background, DT fuels the flames, incites violence by his MAGA supporters, calls the African-American protestors “thugs.” Threatens to send in the military. But the armed white nationalists, who protest against the orders of Democratic Governors to stay home to keep themselves and others safe⎼ they, of course, are “good people.”

He is using the protests to create a new crisis and distract us from the ongoing pandemic of racism and COVID-19, which is still killing thousands. But I think⎼ or hope⎼ he has made a mistake. In the past, DT has worked to instill, in his supporters, hate of African Americans, Latinos and other people of color, Muslims, Jews, Democrats, and others, and instill fear in anyone who opposes him. (He even re-tweeted a video of a supporter saying, “The only good Democrat is a dead Democrat.”) What he’s done this time is turn his opponent’s frustration over continuing injustice into a conviction that the only viable choice they or we have is taking action.

And while the demonstrations are continuing, people are dying due to the coronavirus. Over 106,000 people have died. This virus has been made more lethal by the malignant mismanagement of the crisis by the DT government. The GOP have exploited the pandemic instead of responsibly facing it. Some have profited financially, not just for themselves but their mega-rich donors. According to Common Dreams, 41 million people have lost jobs while American billionaires grew $500 billion richer. They have readily sacrificed people to suit their own purposes, and African-Americans have disproportionately been the victims.

This all must end.

The police officer who killed George Floyd was charged this Wednesday with second degree murder. The others who stood by and aided and abetted in that crime have also been arrested. These arrests and the prosecutions that will follow, as well as changes in the operation of the police in Minneapolis, will be a tremendous first step. They are largely the result of people speaking up and taking to the streets. It is one step at a time. Changing the nation as a whole ⎼ that will hopefully follow.

In Minneapolis, there is at least a Democratic Mayor who has shown understanding of the history of racism this murder has exposed (although the president of the police union has not). The nation has a very different leader. For any deeper changes, DT must go.

So, why hope? Because we need hope to act. Because more than half of the people of this nation are sick of these injustices and are saying so. People are sick of one murder after another⎼ and sick of coronavirus deaths. Of the stupidity, injustice, and malevolence. Of the racism institutionalized into a political, economic and social system that is at the center of the malignancy that is splitting open this nation. Justice for this murder might lead to justice for other murders and abuses of government power. And then the rule of law and the civil rights protected in the constitution will be protected in the streets, the courts, and the Congress.

And inside the anger there are tears. When everyone took a knee at a demonstration  yesterday protesting the death of George Floyd, the sadness over his death, over so many lives taken, suddenly hit me, hit everyone. But instead of crying I write this.

Only voices united in opposition can reveal and expel that malignancy and create the social and legal situation where a guilty verdict against police is possible. In 1963, Martin Luther King, Jr. spoke at the Lincoln Memorial about “the real promises of democracy.” He said, “It would be fatal for the nation to overlook the urgency of the moment.” He spoke of his hope. His dream. It is illustrative of this moment that DT has stationed troops at the Lincoln Memorial to drive away the hope and the dream. He won’t succeed.

So, after the fear, anger, and outrage⎼ and the sadness⎼ the hope shyly follows.

*This post has been syndicated by The Good Men Project.

*The photo is from Gary Bercow. 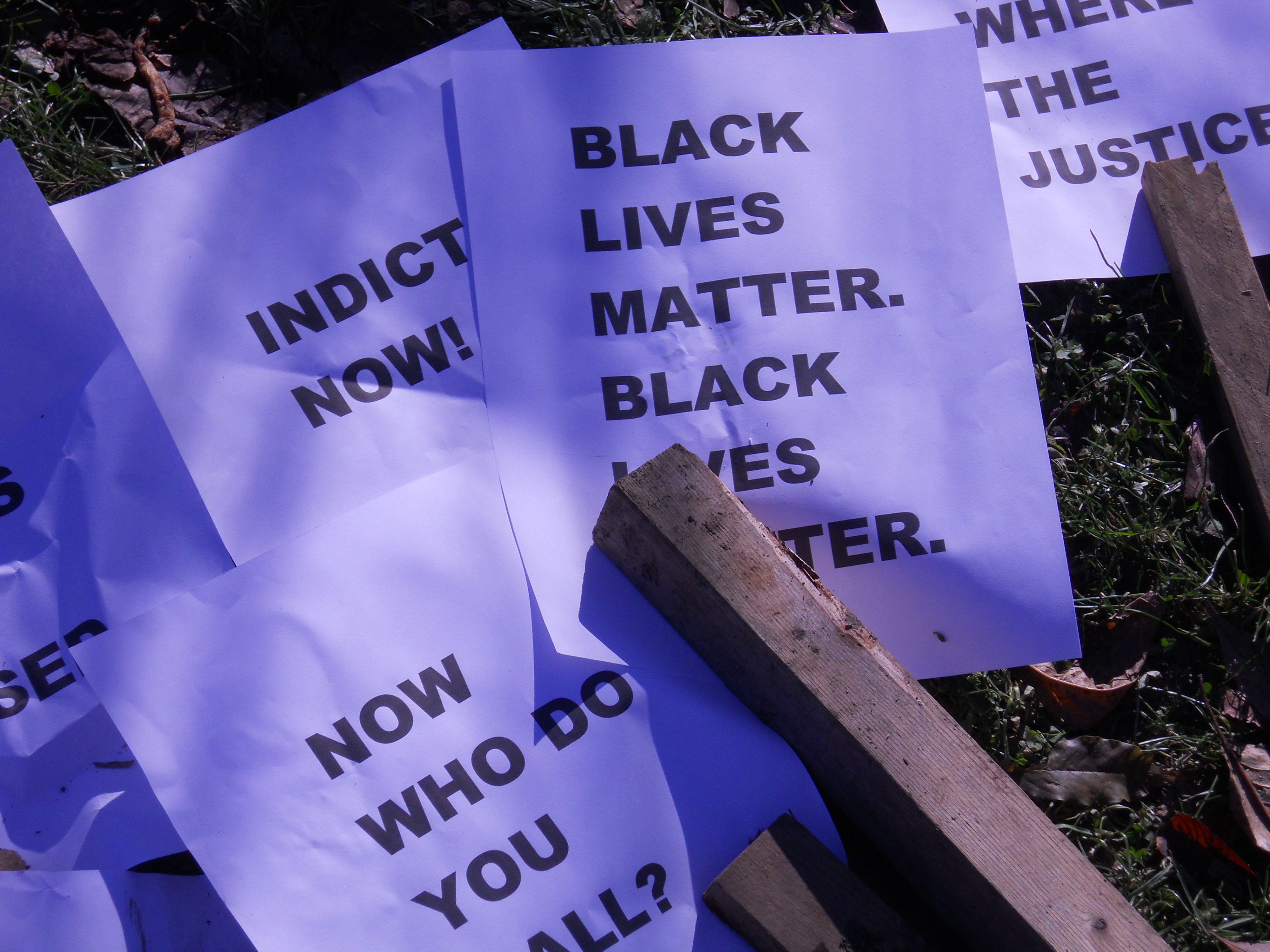 When Will We Learn?

Listen to the news:  Ferguson, Staten Island, Cleveland, Brooklyn. I feel like the universe is slapping me in the face, slapping all of us. “Look. Can you see? Can you feel?” Racism, yes, and so much more. Is this what happens when an economic system, and its political and justice system, is lopsided and only a small percentage of “We The People” control most of the wealth and power? I listen to the news and feel angry, and am heartened by protests. But I also recognize fear in myself. The biggest fear is that not enough people will hear what I hear.

Will people hear the questions being asked? Questions like: Will substantive change happen? Will the Grand Jury in Brooklyn indict the police in the Akai Gurley killing? Will the federal investigation into the death of Eric Garner lead to prosecutions? Will there ever be a trial for Darren Wilson? Will we as humans make the effort to create a more equitable nation and world?

Will we bother to educate ourselves, to better understand our own mental processes so we can understand the importance to all of us of justice and equity?

These events are part of the curriculum for our nation. The streets are texts for our classrooms. And I am not just speaking of current events classes but all classes. Science can study the neurobiology of compassion and attunement systems in the brain. Social studies and history can study the effects of greatly unequal wealth distribution. They can study systems of justice and how nations transform themselves—or fall. English classes can write stories of street experiences and read about people fighting injustice and persisting in the face of great challenges. Language classes can study the relationship between language and thought systems and the necessity for diverse perspectives in thinking critically. All classes can ask: Brown, Gurley, Garner, Rice—and Wilson: who are they? They are people who feel and think not much differently than you and I feel and think. To try to separate them from ourselves distorts the substance of our lives and makes us incapable of acting in a humane, well-considered manner. There is no justice without compassion and understanding, no understanding without empathy.

We all have to learn enough about how our brains work so we can understand how we can misunderstand ourselves and dehumanize others. I think most people believe in what is called “naïve realism.” We think the world is just as we see it. We can feel our own sensations but not (or rarely) those of others. So we think the red of the apple is all in the apple, the sound of a raindrop is all in the raindrop. We can’t understand why other people don’t like what we like. The person over there who I never look at is not as aware or valuable as I am. I am right and they are not seeing the situation correctly.

This study of how events on the streets speak to political, economic, and legal systems, and how they relate to the mind and our social-emotional nature, should be required in our schools.