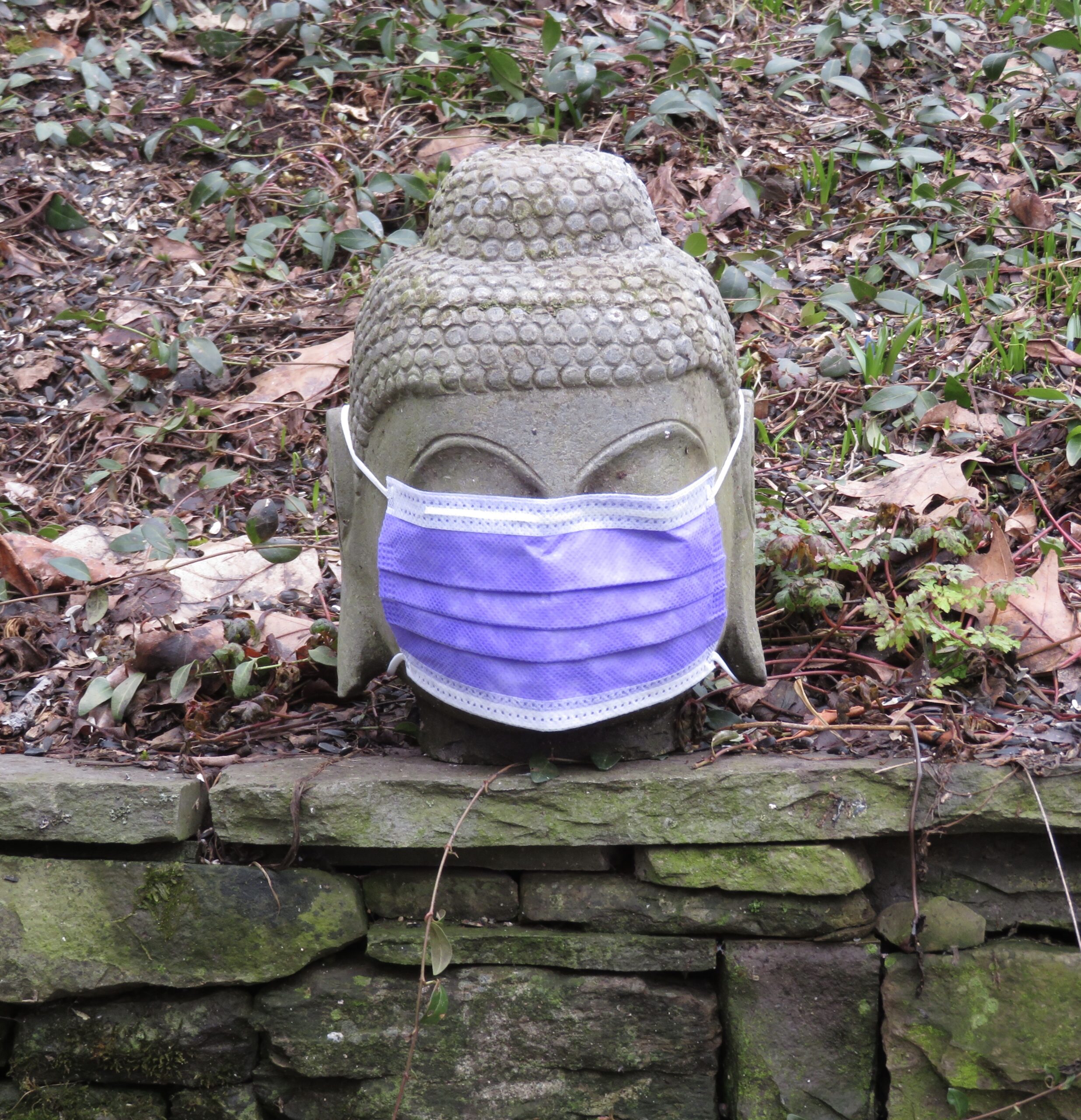 We use the word person to refer to what we are and say we have a personality. The root word here is Latin, persona, meaning a social role, image, or a theatrical mask or appearance we wear in public. Psychologist Carl Jung used the term to mean the social face we present to others, a mask or image we create, or way to hide elements of ourselves. So, in a way we were the masked species even before the pandemic.

From antiquity, masks have been an important element of possibly all cultures. Most staged dramas began with performers wearing masks. In Ancient Greece, for example, the legendary poet, Thespis, was supposedly the first to put an actor on a stage and turn choral recitation into drama. He created larger than life masks that also acted like a megaphone. The first written stories were myths with existential and religious themes, about creation, life and death, heroes, and heroines. The first dramas were enacted myths, so drama emerged from religious ceremonies. But what happens when we wear an actual medical mask in public while doing everyday tasks?

Of course, politics also enters the picture, as the right-wing in the US and elsewhere have turned a medical necessity into a political statement, thus undermining the effectiveness of masks as simply a practical way to prevent the spread of a deadly disease. This influences how we respond to masks and perceive those who wear them, as well as undermines the value of rational, factual based decision-making. It purposefully turns the social sphere, the public commons into a stage for enacting a political and possibly even a religious drama.

Other people are no longer perceived as persons very much like us, but as characters in a drama. And when political leaders of one party threaten and call for violence against another party or against anyone who disagrees with them, that drama can too easily become deadly.

According to a research article by Frontiers in Psychology, COVID masks cover about 60-70% of the area of the face responsible for emotional expression. This makes identification of others or any social interaction more difficult. It limits the ability of other people to read our emotions and hear what we say, as the sound of our words is usually augmented by the sight of our lips moving and changes in facing expression. Consciously reading subtle emotional cues as well as the trustworthiness or honesty of others can be difficult enough for many of us without a mask. A mask obviously diminishes this ability.

How much does a mask become a blank slate for us to project our own personal dramas? We all know how deeply important how our face looks is to most of us. Especially today, with so many suffering from anxiety and trauma, we can feel extremely sensitive, self-judgmental about how we look, afraid of the tiniest “imperfections.” … 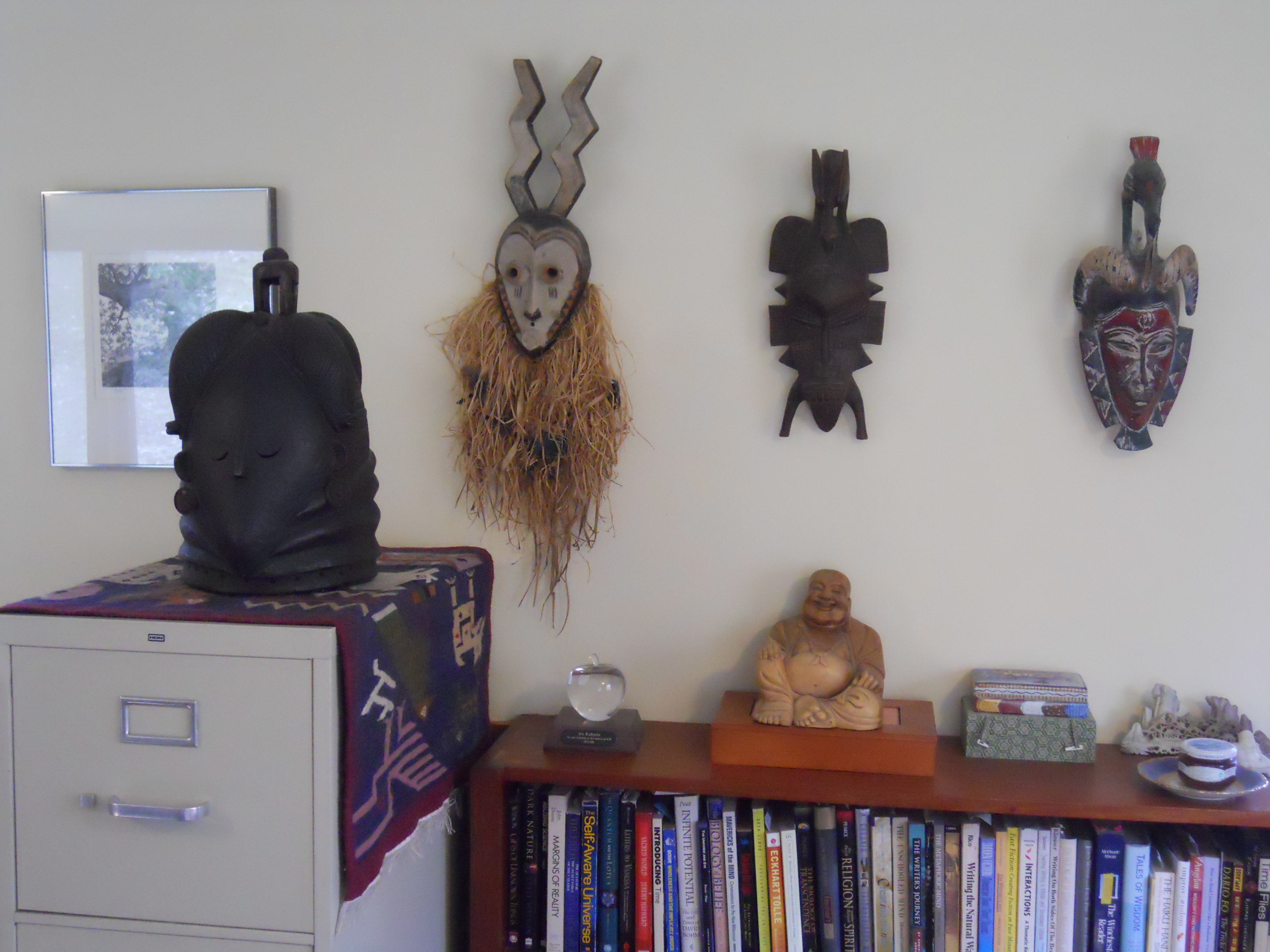 When I was in the Peace Corps in Sierra Leone, I once got the chance to witness spirit beings emerge from the jungle to dance a story about the origin of creativity. The spirits were also people wearing carved wood masks and raffia from their neck down to their feet. After the dance, the spirits walked amongst us and then returned to the jungle. I didn’t realize then that I was seeing an early form of theatre.

In Ancient Greece, the legendary poet Thespis was supposedly the first to have an actor step on a stage and turn choral recitation into drama. The first dramas told mythical stories. In fact, they were enacted myths, so drama emerged from a religious ceremony. Actors, just like the spirit dancers, were those who could take in and express the power of a myth or spiritual story. In fact, Thespis also introduced masks so actors could play different roles and genders. This was not just putting on a costume. It was putting on an identity, often an identity much bigger than one’s own.

When students today take on a role they are partaking in a very old tradition. They are taking on someone else’s character and history. To do the job well, the actor must let go of their own ego border enough so they can feel the feelings of the role, of the other person. The student standing in the shining lights of a theatre illuminates the question of identity which all of us, certainly teenagers, face. Who is it standing in those lights? And who are you when the show is over?

The actor makes himself vulnerable, open to the community’s judgment. It is almost sacrificial. If the actor fails, forgets a word, loses connection to the dramatic reality, they often feel devastated. In this way, an actor is heroic. This is extremely powerful. To be seen in stage lights is to be seen in a heightened light, in a way you can’t be seen in ordinary life.

Just imagine the effects acting can have on a student. A shy student, a student unsure of her identity, or a student who is disenfranchised or ignored by others can, with drama, become a hero. The intensity, creativity and sheer amount of work that goes into a production can also bring students closely together, make them feel cared for, part of a group, part of something larger than themselves.

But this power can work on people in many ways. The actor, feeling the vulnerability on stage, can either carry that openness over to their daily life or build walls around it to be opened only in the lights. They can let themselves think their special status onstage is their due offstage. They can so identify with being in the lights that they mistake the mythical power of the stage as their own. Our culture worships stars and this worship can either fuel or distort the creative process—and one’s own sense of oneself.

This worship and the dreams it inspires in students made casting our annual big production the most difficult time of the year for me. There were always disappointed students, always tears. Some schools just thought of putting the “best” singer or strongest actor in the lead role. I wanted not only a great performance but a great learning experience for everyone in the group. Sometimes it was not the lead who carried the play, but one of the supporting roles. Sometimes, I had the students cast the show themselves. This practically always worked out well, with few complaints.

Students must learn the historical background out of which modern theatre emerges. They must learn how to take on and then let go of the power of the stage. The power is not only one’s own but derives from one’s engagement with the role. The role is part of a whole play. It is dependent on the rest of the cast, the tech crew, and the process of rehearsal. It is dependent on the audience. The actor must learn that identity arises in a situation. It is not formed once and forever, but moment by moment. You don’t do something wild, like play Romeo or Juliet, and for all time you are a romantic hero or heroine.  For one glorious moment you enact that role, you give people that example of how to live. Then, a new moment arises, a new situation. What role will you then play?

I clearly did not always succeed in getting across these lessons. The pressures that develop during a production can be enormous. In order to help both the educational and creative process, it is important to get students to take on roles not only on stage but off. Students can help in casting and in researching and choosing the play. They can be assistant directors and choreographers. Almost all schools have student costume designers, stage managers, and tech crew. It is important to choose plays and even musicals that have several good parts, so as many people as possible can be stars. I did a series of one act and short plays each fall. This enabled almost everyone to get a decent sized part and one that they wanted to play. Each spring, we did a larger production. We did shorter runs, of one to three shows, in order to not get overloaded—and to emphasize that the whole process was important, not only the show itself. We used meaningful rituals to get everyone engaged, loosened up, energized, and to have fun. One of our most important rituals was doing the Hokey Pokey very loudly before each performance. Instead of me deciding on all the stage action, as much as possible I had the actors improvise stage action during rehearsal. And, on the first school day after the show was over, we always had a check-in session, to discuss people’s feelings, reflect on how the show went, put audience feedback in perspective, and say farewell to what was hopefully a great experience.

The cultural and personal expectations, as well as the sheer effort required by a performance, made drama the most difficult class I ever taught.  It also provided the most amazing highlights.