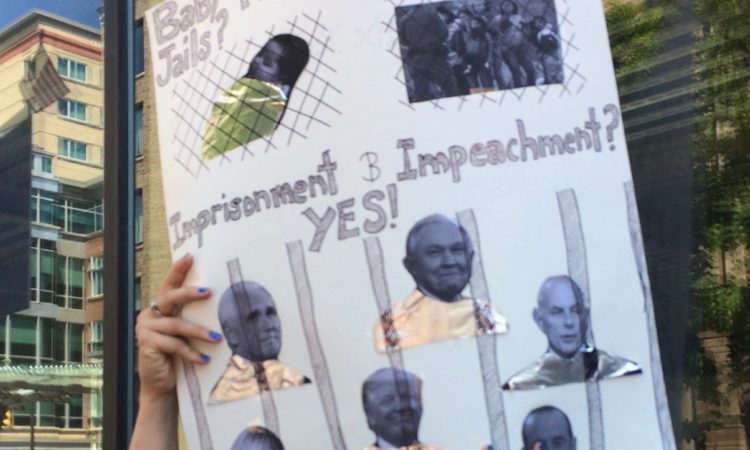 Tomorrow: Getting Ready to Act

On Thursday morning, Attorney General William Barr will release a redacted version or the Barr version of the Mueller Report. We know Barr is a T crony, so none of his statements or justifications for redactions can be taken as truthful or as meant to serve the overall interests of this nation. He is the general attorney for T, not the Attorney General for the American people.

In the meantime, T continues to act to undermine the rule of law. T even told Customs and Border Protection Commissioner Kevin McAleenan that if he violated the law by blocking asylum seekers from entering the US and was arrested, he, T, would pardon him. T recently repeated his old lies about Democrats being responsible for bad immigration laws and Obama being responsible for separating children from their parents at the border. He also threatened to release imprisoned immigrants into sanctuary cities in order to get back at Democrats.

He has also continued to act in the interest of Putin, and not the interest of our democracy, so much so that many think of him as a Russian agent. T has acted in Putin’s interests in so many ways, for example by not acting to secure our own electoral integrity after Russia hacked and shared Hillary’s emails and manipulated social media during the 2016 election. He has driven wedges between the US and our NATO allies. He has provided sanctions relief to Russian oligarchs, lowered the standing of the US in international affairs, failed to adequately staff and support the state department and other non-military agencies meant to protect our national security, etc.

So whether or not it can be proven in a courtroom that T has knowingly colluded or conspired with Putin to undermine our democracy, the effect is the same. Our democracy is being undermined, daily, by T. The interests of Putin, oligarchs, despots and the ultra-rich are being served, not the interests of the great majority of people. And whether or not T’s obstruction of justice could be proven in a court of law, he obstructs justice, publicly and repeatedly.

So what will we do? What will you do? The situation in this country is so frightening that many of us feel our level of anxiety continuing to rise. We feel afraid to hear the news but know we can’t let this new normal lead us to sit on the sidelines while our rights, freedoms and sense of shared humanity are destroyed.

Many of us feel we need a break, and we should take breaks, frequently, as this battle will continue until we elect a new President or this one is arrested and escorted out of office. We need to take walks in the woods, read books, exercise, meditate, and hang out with friends and family. But on Thursday, we must be ready to speak out and take action. Maybe the redacted report will provide some relevant information that we need to hear. Maybe. But even though Congress will not be in session, we can let our anger and disapproval of T’s actions be known.

Just to confirm that Barr is acting in the role of Mr. T’s protector, or as T’s attorney, not the Attorney for the people of the US, it was announced just a few hours ago that:

*Barr will hold a news conference tomorrow at 9;30 am.

*According to The New York Times, the President or his attorneys have seen the report already and discussed it, repeatedly, with Barr, but Congress won’t see it until around 11:00 am or so, after the news conference. Mr. Barr can once again place himself between the report and the people, Congress, and the news media.

*This gives the President, as the person under investigation, the chance to rebut, minimize, distort, or bury the report before any of us can see it. This undermines the rule of law and destroys any confidence in the independence of the justice department.

*And this is happening right before Passover and the Easter weekend.

Like33 When I turn on the radio or tv to hear the Senate Impeachment Trial of the President, it is difficult to get beyond my fear, disgust or outrage. But when I do, what has become clear to me is that despite great gains on Wall Street, and the US having the largest economy and…

Like33 The Manchurian Candidate is a classic movie from 1962 in which Russian Communists initiate a plot to use a brainwashed American soldier as a sleeper agent to kill the candidate for American President. Evidence would be revealed to show the Russians were responsible. The Vice-Presidential candidate, someone controlled by the Russians, would then succeed…

Like33 For the last few weeks, if not the whole of his administration, T has been standing in front of the American people and tearing up the constitution. His lawlessness, public obstruction of justice and efforts to undermine this nation have reached new levels of affront. If we don’t respond with a tidal wave of…

Next ArticleOpen Warfare Between T and the Constitution