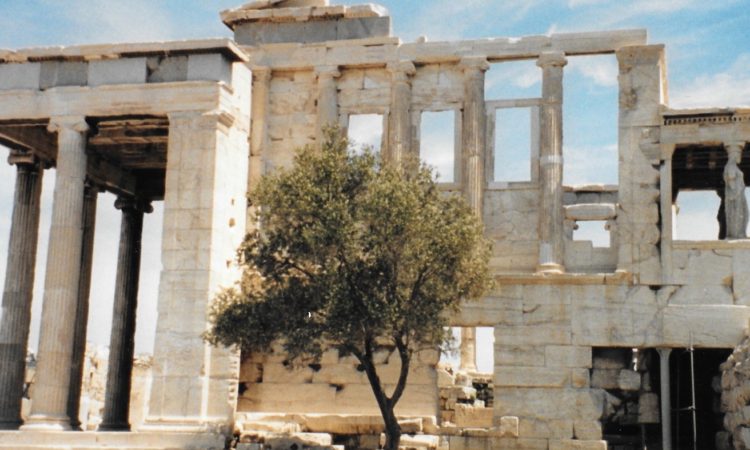 I used to teach a high school class on the history of human ideas. I noticed that the students in the class often had trouble accepting that people were ever substantially different than who they are now—that society could be very different, beliefs very different, life very different. Or if they could accept the differences, they couldn’t feel the difference. We were always what we are now. We move through the world as if what is in front of us now was always there in the past.

I myself wonder about this. How different would I feel about life if I had lived in Sumeria in 3500 BCE or India in 450 BCE? Even though I traveled a lot when I was younger and even lived in places very different from where I live now, I still have only a limited idea of how different the differences between cultures and times in history could be.

But I know that without my experiences in other cultures, and without some knowledge of history, my understanding of the world today would be severely limited. And even more, my understanding of what is possible would be limited. History is not simply a timeline of events and people. It is a panorama of possibilities and lessons about what it means to be human.

Yet, for several years, schools have been forced to decrease the study of history, and the humanities, in favor of STEM (science, technology, engineering, and math). This is not simply an attempt to counter a decrease in interest in the sciences. The concern for developing student understanding of themselves as whole people is being replaced with a concern for meeting the expectations of employers. The New York Times reported that several Republican politicians have portrayed liberal arts education as expendable, a frivolous luxury taxpayers should not be expected to pay for.

In a time when many politicians and news outlets try to wrap our minds in false news, and shock us into inaction and compliance, we desperately need an understanding that these events we live through—this is all history. Situations change. There are truths. Irish statesman and philosopher Edmund Burke (and others) famously said, “Those who don’t know history are doomed to repeat it” or allow it to be repeated. Without studying history, my understanding not only of what once was but what might be, or of how political and social structures have changed and will continue to change, would be constricted. And, thus, my belief in and ability to engage in political action would be constricted. Without a sense of history and truth, we cannot understand what is real. We cannot influence history in a conscious, deliberate, and liberating way if we do not feel that we are part of making it.

So one element of the study of history in schools must include listening for the souls of those who came to this earth before us, as well as those we share the planet with now. It must include lessons in empathy and compassion, so students can psychologically place themselves, as much as is possible and appropriate, into the historical situation studied. After immersing students in studying facts about a time in history, a teacher could lead them in imaginatively picturing themselves in a specific situation in that time period, like attending the Ekklesia, or Assembly of male citizens (the Congress) in the Athens of 450 BCE, or of participating in the demonstration in 1917 in Washington, D. C. led by the National Woman’s Party, to win women the right to vote. Ninety-seven suffragists were arrested during the protest for “obstructing traffic.”

Teachers can ask students to pick a spot in the town or city they live in, and then research, create a timeline of how the spot looked in the past. They can decide on the dates and number of intervals to portray, maybe starting 600 years ago. This is one way to actually feel how and that change occurs.

Even more, ask students, on the first day of classes: What are the biggest problems you see in the world today? After sharing these, ask: which of these problems is central? In my history class, the final assessment entailed choosing one problem and following it through history, and in the different cultures we studied. They would have to describe and analyze the nature and extent of the problem, and give an overview of the beliefs and conditions (social, technological, religious, philosophical, etc.) that gave rise to it. In this way, their own questions became the heart of the class.

Another element of the study of history is confronting the ethical questions that abound in our lives. Factual questions in schools cannot always be disconnected from ethical ones without paying a price a society can ill afford. Questions about the science of atoms, for example, can be followed with the questions of how or if such knowledge should be used. In LACS (the school where I taught for 27 years), one teacher, Chris Sperry, taught a wonderful course called “Facing History and Ourselves,” an in-depth inquiry into the holocaust, not just through a textbook linking of dates and events, but through letters, news accounts, photos and eyewitness testimony, novels and stories, psychological studies and poetry. Students put themselves into the issues of the time period in order to understand how they would have felt and acted, and thus have a better idea how they might feel and act in today’s world.

Timothy Snyder, in his book On Tyranny: Twenty Lessons From the Twentieth Century, aims to help us do just that, to take part deliberately in shaping history, so we, together, will write a history of saving democracy from the tyranny which now imperils it. One lesson is “Do not obey in advance.” Do not believe, do not follow, do not let fear overwhelm us just because it comes from an authority.

And ”Defend Institutions.” Do not deceive yourself into thinking that any institution, political, social, or educational will continue to exist just because it “always” has existed. Do not imagine that what protects, feeds, listens to us now will do so in the future. There are no institutions without people supporting them.

Republican politicians have been working to suppress the vote and undermine the institutions of our democracy. They have been working to eliminate citizens of color from State voting roles, demanding means of identification some voters do not have, in order to make it more difficult for them to vote. They are attacking public schools, the EPA, the free press. Right now Sinclair Media, through the collusion of FCC Chairman Ajit Pai, is attempting to circumvent rules protecting competition and diversity in the media. They are aiming to expand its reach into 72% of American households, mostly through getting control of local media, in order to broadcast Trump propaganda. (Congress this week will be discussing whether to keep Pai as FCC Chairman. Consider calling your Congressperson to express opposition to Pai & the expansion of Sinclair Media.) In times like these, we must defend our institutions.

Snyder warns us to “Beware the one party state.” “Take responsibility for the face of the world.” And “Beware paramilitaries.” Beware militarization. Beware the use of generals in the political sphere of the government. Read the book. It is short. It is one small way to take a big step.

It is too easy to forget that history is the story of all of us. It is a tale about relationships, not just dates, and not mysterious “historical forces.” It is a tale of human suffering caused not just by weather and environment, but by humans. And it is a tale of love, caring, insight as well as greed and delusion. It is about the whole reality of human life and how to be humane, how to recognize the humanity of all of us. And only when the teaching of history speaks to the whole reality of human life will it help students contribute to improving that life. In this time in history, our continued history depends upon how well we learn and teach these lessons.

Like168 I was walking up this long rural road, a road I walk or drive on almost daily. And as I looked to the distance ahead, let my mind rest mindfully in the view, I suddenly felt there were layers in this road or under it. Old roads. Unknowns. The road has two lanes now.…

Like168 I am dreaming that what seemed impossible yesterday will be possible tomorrow. Or as Anne Applebaum put it in her recent article in the Atlantic, the Impossible Suddenly Became Possible. People are waking up to the fact that war can still happen, yet we can and we must not only save Ukraine but save…

Like168 Imagine this. It’s 9:10 pm. You’ve been getting calls. Disturbing, threatening ones. Calling you “dirty… disgusting.” Accusing you of crimes against your nation, against the leader, or ex-President or whatever. Or of being a paid agent. They call the authorities to arrest you. They threaten you and everyone you love. You are Black. Latinx.…

Like168 There are crucial links between what is needed to stimulate political action to fight tyranny and what is needed to limit or reverse global warming.   The first lesson discussed by Timothy Snyder about fighting tyranny in his best-selling book On Tyranny: Twenty Lessons from the Twentieth Century is “don’t obey in advance.” Don’t…