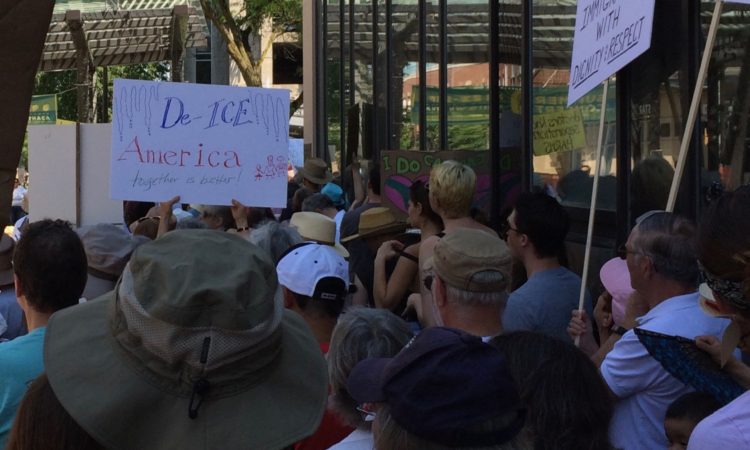 If we don’t say NO, now, it might soon be too late and it might be illegal to say anything. No. DT does not have the power to disobey the law or turn the DOJ into his Department of Deification. This Wednesday, 2/26, or all week, call Congresspeople, call the Senate, put a sign in your car, go to the streets.

Trumpists argue “The President is the Executive Branch and the Commander in Chief. He can do whatever he wants.” But the constitution says he must swear an oath to “preserve, protect and defend the constitution.” His job is not only to “faithfully execute the laws” (Article 2, section 3) but also obey the laws. The power to try cases is the power of the judicial branch and he must not infringe on that power. To infringe on judicial and legislative powers is to violate not “preserve and protect” the law and the constitution. We didn’t convict DT in the Senate impeachment trial, but we must convict him on the streets and with the ballot.

Politics as Civil War: DT Must Be Impeached Immediately or Removed Via the 25th Amendment

Like Mao said “Politics is war without bloodshed while war is politics with bloodshed.” A variant of a quote by Clausewitz is “War is merely the continuation of politics [policy] by other means.” But yesterday in the U. S., blood was shed. We have in DT’s USA, politics as civil war. After 4 years of…

Like The Manchurian Candidate is a classic movie from 1962 in which Russian Communists initiate a plot to use a brainwashed American soldier as a sleeper agent to kill the candidate for American President. Evidence would be revealed to show the Russians were responsible. The Vice-Presidential candidate, someone controlled by the Russians, would then succeed…

The Day Is Coming

Like Or maybe I should say the day has come. Yesterday afternoon, the Mueller Report was turned over to Attorney General William Barr. With it goes the hopes and fears of practically all of us. With it goes the possibility of resurrecting democracy in this nation or ending it. With it goes, possibly, our future…

Next ArticleWe Are in the Fight of Our Lives: Reducing Anxiety with Political Action