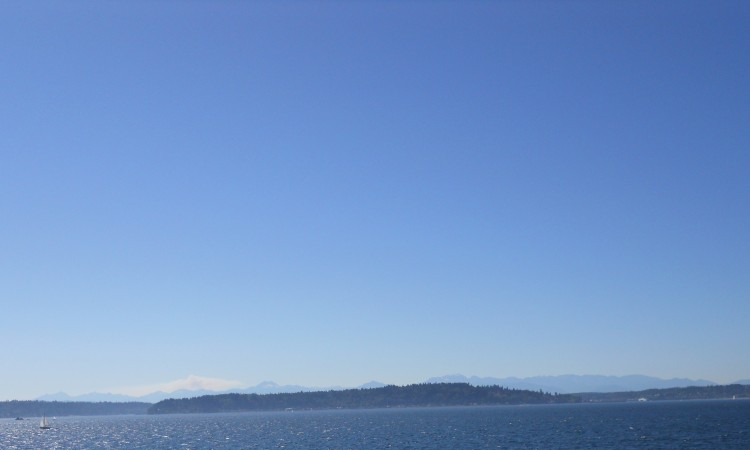 How often do you look up at the sky? I mean, just look at it? I am more likely to do it at night. I walk out of the house, onto the deck, and the stars are just there. Of course, it’s easier for me than for most people because I live in a rural area where the night sky is not hidden by the lights of a city. But usually, especially during the day, I look at the sky only as the distant background, like when watching a hawk fly off from the road into the sky. My mind is usually taken up by human affairs, plans, news, and the remnants of a conversation, not the empty sky.

But when I do look at the sky, I can get lost in it. The vastness overwhelms me and, interestingly, I then see more clearly. This can be a great lesson. When my mind quiets, my perception improves. Why does that happen?

There are so many questions about perception and the best ones are not only scientific but philosophical. We look at the world and think the world is as we perceive it. When we see a tree, we think it is just there, entirely separate from us. We see the blue sky and don’t feel the blue is our own artwork. We think it is out there, on its own. But is that true? And, if so, to what degree? To what degree, if at all, does what is perceived depend on the perceiver? I won’t even go into the toughest question of them all, and that is how is it that I can perceive, or be conscious, at all? Teachers need to ask these questions of themselves and their students.

Remember the game of peek-a-boo? It’s a common and wonderful game to play with children, who are not sure that the world, you, their parents, will not disappear when they close their eyes.  The question is, if you close your eyes, what is it that remains of what was seen?

To better understand the role of the perceiver in what is perceived, maybe start by thinking of a person who is colorblind. If you’re color blind, can you imagine the world full of color? Or if you’re not color blind, can you imagine how your sense of the world might change if the world was less rich with color, closer to grey and white? Or can you imagine seeing the world with four primary colors, like some fish, instead of three? Or, better yet, try to imagine you’re a dog or a cat. A cat has less visual acuity than a human, but their ability to perceive movement or see at night is far superior to your own. A dog’s sense of smell is at least 10,000 times stronger than yours and a cat’s is almost as strong as the dog’s. This sense of smell is further enhanced as the nose has the quickest route to the brain of any sense. Smell, even in a human, is also the first sense to fully develop. The messages received by the nose go directly to the older emotional centers of the brain.  The cat or dog thus moves through a world of emotions arising as scents. They move through a world defined largely by scents just like you move through a world of sights.

What our eyes sense is light waves, not color. Color is the way we perceive a certain wavelength of light to which our senses (and brain) are sensitive. There is so much light out there that we just aren’t equipped to see. So, the world without beings who can sense is full of different wavelengths of light, but not colors. Wavelengths of sound, but not symphonies. Floating molecules that can stimulate smells, but not the delicious aroma of liquid chocolate.

What we see and who sees are thus inextricably tied together. They are one.

So, when you look at the sky, I recommend that you just look, without any inner commenting. Or, if you’re in a room, use your imagination. Let your body settle down. Focus on breathing in and then breathing out. And let come to mind the blue sky in all its vastness. No wind, no disturbances, just an open, bright, blue sky. How do you feel when the sun is shining and the sky is clear? A wonderful feeling, isn’t it?  Just sit with this sense of openness, this clarity and spaciousness.

When the mind is open and spacious, then self-concern, self-description, self-commentary are all dissolved. There is not a you, here, and the sky over there, separate, off in the distance. The sky is no longer a baby blue color off in the distance on a cloudless and quiet day. The sky is right in front of your face. It is so close, you don’t see it or think of it as sky. You don’t label it, separate from it, but you do breathe it. Or, better yet, it is simply breathed.  You do nothing. Openness of sky just meets openness of mind.

Can this be done? Can you perceive the world and other people with such openness, with no distance, and with everything beginning with a breath?

Like8 It’s been eight to ten days of “firsts.” Last week, we woke up to find a hawk, with a bleeding chipmunk in its claws, sitting on a branch of the old apple tree outside the front door. That was a first.   A few days later, after midnight, a raccoon came in the second-floor…

Like8 It’s the day after Earth Day. Snow ⎼ big, slow moving white flakes are falling onto red-winged black birds, blue jays, gold finches, robins and cardinals. And the snow weighs down the flowers in the yard breaking some of the stalks ⎼ yellow daffodils, blue squill, lavender crocus, hellebores ⎼ and it buries the…

The Question We Ask Each Morning

Like8 The poet, Mary Oliver, wrote: “Every morning The world is created…   The heaped ashes of the night turn into leaves again   and fasten themselves to the high branches…”   It’s night and the world outside my window is so dark. There is no moon that I can see, and my house is…

Like8 My wife was watching Sleepless in Seattle. Such a classic scene, at the end, when the two destined lovers finally, after so many twists and turns, let go of their own resistance and embraced their lives and each other. Jimmy Durante provided the musical background.   Make someone happy Make just one someone happy…

Next ArticleWriting As A Process of Discovering Your Truths And Power