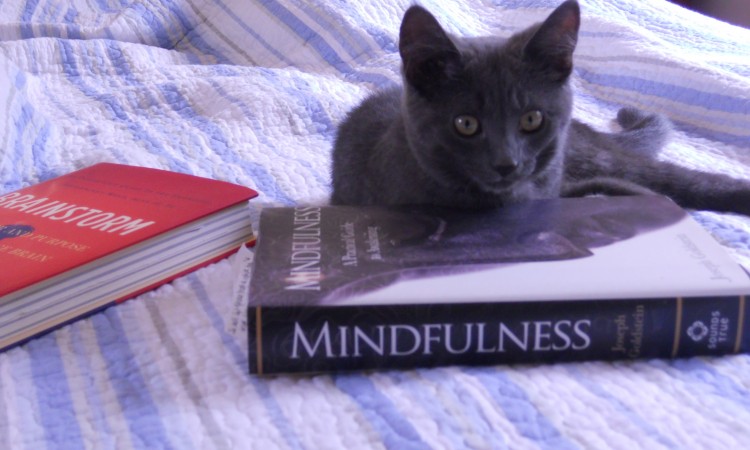 I’ve been reading two books lately. The first is Brainstorm: The Power and Purpose of the Teenage Brain, by Daniel Siegel. The second is Mindfulness: A Practical Guide to Awakening, by Joseph Goldstein.

Adolescence has commonly been described as a transition period from dependence on adults to independence, marked by raging hormones and an immaturity that has to be endured until we grow out of it. I think this viewpoint reveals a very mixed attitude towards teenagers. We fear “them” as well as dream of “their” youthfulness. Siegel uses the latest neuroscience to characterize the common viewpoint as a set of harmful myths.  Adolescence is generally defined now as ages 12 – 24. He says it is a time when skills and approaches to life that are of enormous importance to the continuance and growth of society are developed. It is less a time to be endured and more a time to be appreciated and encouraged. It is a time of emotional intensity and social engagement, of great brain growth leading to the breaking of boundaries and creative exploration, of seeing the world anew. It is a time where someone can move not from dependence on adults to independence, but from dependence to mutual support or interdependence.

As Siegel points out, a teacher’s attitude towards a child’s ability influences how well that child will learn in the classroom. Likewise, how a culture acts towards it’s young people will influence not only how well they learn and develop as teenagers but how they will think of themselves throughout their lives. Siegel’s gift to us in this book is a transformed way to view not only teenagers but ourselves. He provides not only an analysis, but mindfulness exercises and reflections so we can transform adolescents, adults, and our society from the “inside out.”

In many descriptions of mindfulness for schools, business, medicine, law enforcement, etc., the full context and potential of the practice of mindfulness is not presented or even hinted at. Mindfulness is not just stress reduction or the ability to let things go so you can concentrate on your work. It is moment-to-moment awareness that is open to whatever arises in the mind or occurs in one’s environment, with no added commentary. This awareness is both ordinary and of startling depths. The question that the common description of mindfulness does not answer is: how do you get to those depths?

One source for an understanding of, and a path to, those depths is Buddhism. Mindfulness is one element of the Buddhist 8 Fold Path, a larger practice that includes wisdom, or clear knowing, ethical behavior and compassion, and concentration. Goldstein’s book leads us in a study of The Satipatthana Sutta, the Buddha’s discourse on the “four foundations of mindfulness.”  Sutta is a Pali word (the Indian language spoken by the Buddha; sutra is the Sanskrit word) whose root means to sew (as in suture). Suttas are texts, originally oral teachings, sewn to hold things together.  The four foundations are of the body, including your breath and activities, of feelings and sense perceptions, of mind and thought, and of what is true or real (dhammas in Pali). The book, and the sutta, is extensive. I usually read only two or three pages at a time and then think about and practice what was discussed.

Both of these books provide insights and practices which might make the transition from summer to the new school year less stressful and more inspiring.

Like28 One way to improve education recommended by many “reformers” is the use of “value-added models” or criteria to evaluate teacher performance. If you’re not familiar with the concept of value-added models in education, it means, in practical terms, that teachers are judged by how much their teaching improves a student’s scores on a standardized…

Next ArticleBeginnings: How Do We Begin The School Year, Or Anything, As Skillfully As Possible?