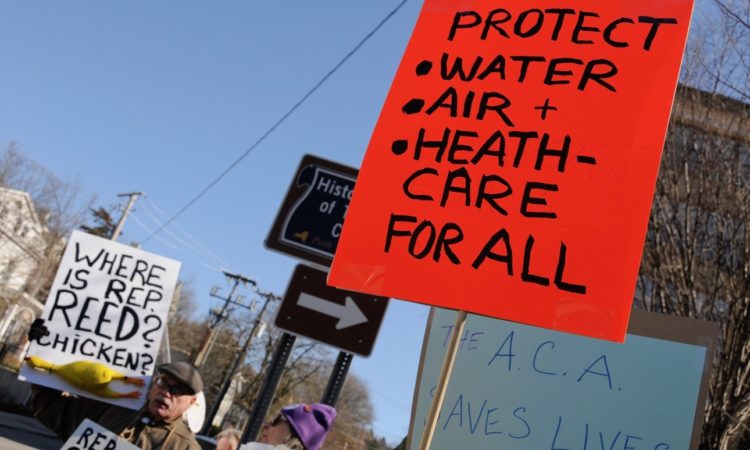 As many people have realized, this moment is a test. Right now. Or better yet, an opportunity. Not in the sense of a test in school, or for a job, not one with a number or letter score, not one with a scorekeeper. It is a test in the sense of a coming of age ceremony, which tests and strengthens our character. We human beings have a chance to come of age. Of course, this is true every moment. Every moment is an opportunity to wake up and demonstrate who we are. But some moments, both in our lives and in history, are heightened by the knowledge of what is at stake. This is such a moment.

An example of just how little these Republicans in the center of this administration care about the well-being of others is the proposed health care legislation. The Senate bill would, according to the CBO, lead to 22 million Americans without health insurance, and thus lead to the deaths of 27,000 people annually due lack of adequate health care. It would have created economic and health insecurity for millions of Americans. The proposed repeal of Obamacare without a replacement would do even more damage to individuals and the economy as a whole. Yet they supported this and similar legislation over and over again. Why? To get a tax cut to a few thousand super rich? To say to their supporters, “look how we defeated the previous [Democratic/African-American?] President?” Certainly, none of the bills proposed by Republicans over the last four months would improve health care for a great majority of Americans.

Some argue that it has always been this way. By it they either mean all of human history, or all of US history. It is just more blatant now. Now, information is just more readily available. I disagree, not with the fact that the greed is more blatant now, but with the underlying assumption, that politicians or anyone in power, or every one of us, is essentially selfish, greedy, and lusts for power. That this selfish lust is just “human nature.” To believe this is to essentially give up. Look into your own heart. You will find enough selfish thoughts and feelings and motivations. But do those thoughts or feelings define you? Is that all or most of who you are? And when you feel that selfishness, what happens to your mind and emotions? Do you notice the isolation, sense of distrust, unease and fear that follow?

The struggle being waged this moment is not just to defeat the kleptocratic Republicans, preserve some remnants of democracy, and save our rights and environment. It is to save humankind— to save not only in the sense of physical survival, but in the sense of understanding whom we are. How we act is born in the womb of mind and heart.

Yes, throughout US history and possibly throughout human history (especially since the Neolithic Revolution and the invention of farming and private ownership), there have been people trying to seize power, not just for a moment, but for always. No denying that. But one of the allures of democracy is that it puts power in front of all of us (at least in theory) and says, “Go for it.” Political power is always in question because it resides “in the people,” dynamic and changing. Part of the dynamism arises from those who can’t handle that shared power and so try to end it by controlling it. However, the only way to have a relatively secure democracy is to teach people how to live with being insecure, and in living with and taking an active part, along with others, in exercising power.

Too many of us have been deceived into underestimating our own personal power and capacity to persist, endure, and to feel. We think the challenge is too large, the fight too long, the pain too strong. This is partly a result of the manipulation of media and events to create a sense of crisis or shock, like the “shock and awe” tactic in the invasion of Iraq. But this invasion is primarily against the American people.

According to Naomi Klein, in her new book, No Is Not Enough: Resisting Trump’s Shock Politics and Winning the World We Need, this “shock tactic” is an attempt by the corporate right to take advantage of collective crises and natural disasters in order to disorient us, get us to feel so vulnerable that we will accept policies we would never have accepted otherwise. It is a sinister attempt to make us feel so vulnerable and powerless that our natural impulse to come together and help others is buried. But, as Klein says, we can and must refuse this manipulation. We can decide to use this common threat to build a movement of resistance, hope, justice and love.

To crudely juxtapose two disparate philosophies, that of the French existentialist philosopher J. P. Sartre, and the Buddha, humans are beings who, due to our ability to be conscious and self-reflect, define ourselves through our actions. Sartre said our “existence precedes essence.” We exist first as subjective experience, as personal conscious awareness, and then become who we are (within social and biological limits, of course) through our thoughts and actions. We are responsible for the person we come to be. And from a Buddhist perspective, one could say our essence is this very moment, this awareness. When our minds are clear, we feel how vibrant the world is, how interdependent we all are, and thus how vital and powerful our actions can be.

So, what will we do? What will you do? Will you speak up or take political action in a way you feel is right, maybe make phone calls to Congresspeople, sign petitions, write letters, demonstrate and educate? Feel the power of this moment and come of age? Even simple acts can be profound. Or let others shock us into surrender?

Like One evening a few weeks ago, I was sitting in the living room with my wife, talking, and suddenly heard a sharp cry. Something was rushing outside, on the roof and by the front door. I thought maybe it was racoons, as in the past one had tried to tear out a screen in…

Next ArticleLast Night, A Battle of Good Against Evil?