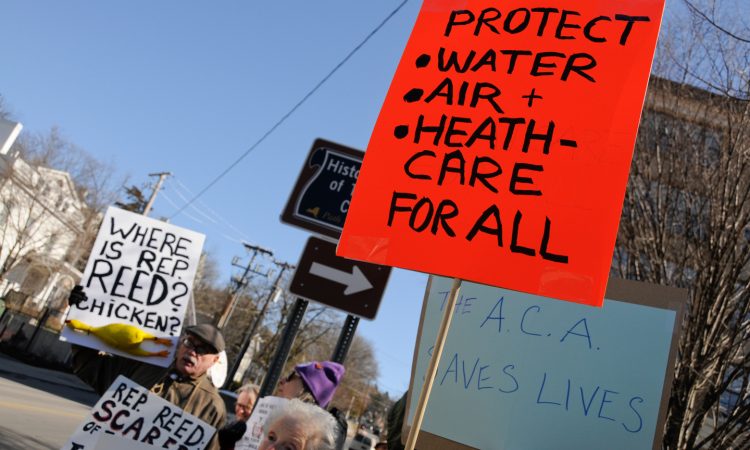 Opposing the Republican minority-elected President cannot be simply a Democratic version of “the party of No.” It cannot be concerned just with revealing lies and resisting racism, sexism, anti-Semitism, and all sorts of phobias like homophobia, Islamaphobia or xenophobia, etc. To fight racism, etc., we must first unite to resist the destruction of what’s left of democracy, free speech and the freedom of the press. We need more political equity. But to accomplish that, we must also work to improve economic equity and a sense of shared humanity. In a functioning democracy, these three work together.

Last week, the Republican administration took things to a new level. The President spoke to Congress about “a country that stands united in condemning hate and evil in all its forms.” He spoke about Black History Month and ending threats to Jewish Community Centers. He spoke as if he cared about supporting “the torch of truth, liberty, and justice.” This was scary because even I wanted to hear such words from his mouth, words calling for real unity and caring. He is seemingly getting coached on how to sound reasonable while his choices and history scream otherwise. This is the same person who appointed Jeff Sessions to be his Attorney General, and Steve Bannon, former head of the alt-right Breitbart News, to be his general adviser. According to an NPR program during the campaign:

“The views of the alt-right are widely seen as anti-Semitic and white supremacist…. They see political correctness really as the greatest threat to their liberty,” Nicole Hemmer, University of Virginia professor and author of a forthcoming book Messengers of the Right, explained on Morning Edition. “So, they believe saying racist or anti-Semitic things — it’s not an act of hate, but an act of freedom.”

This is a President who called the media “the enemy of the people.” Who said protestors were not in genuine disagreement with his policies but were being paid to disrupt town hall meetings. Republican governors and legislators have followed this lead by calling for severe punishments for protestors. This administration is not about protecting America or securing jobs for people. It is about ending democracy and increasing their personal wealth. The DNC, as well as those who hate the DNC and are still fighting the Hillary vs Bernie fight, need to remember this or risk being irrelevant or worse. If we don’t unite, our very right to disagree without dire consequences will be taken from us. In fact, the very air that sustains our life might be taken from us.

Yet, to resist this administration successfully will mean insisting on increasing economic equity. This is the second concern. We must learn from the Occupy Wall Street and Bernie Sanders movements, as well as others of the more distant past, which spoke to a great majority of Americans, even to some of those who supported Mr. T. (Listen to Bernie Sander’s response to Mr. T’s address to Congress.) Most Americans desire an economy that works for all and provides jobs for the unemployed and the not satisfactorily employed. Mr. T did speak of jobs. But he did not address working conditions, guaranteed health care, and a pension, as part of a good job. He did not acknowledge the crucial role public schools can play in “leveling the playing field” and in preparing children not only for work but for all of life. All these issues are related. It is not just a job people want, but to be treated as a valuable being, with a right to meaningful work. This I think speaks to most everyone. And we need to add the right to give our children a habitable planet with a climate that readily sustains life, human, animal and insect.

The US, according to a report cited in Fortune Magazine in 2015, is the richest nation in the world but the most inequitable of the 55 nations studied (including European nations, China, Japan, South Korea, Columbia and Russia, etc.). If you didn’t know this, read on. If you look at the US economy, the richest 1% own 40% of the wealth. (I will be using many figures from Mathieu Ricard’s book, Altruism, published in 2015. Ricard is a Ph.d. in genetics and Buddhist teacher. His figures are well documented and seem in line with other reliable sources.) Twenty-five years ago, the top 1% owned 13% of the nation’s wealth. In 2015, Oxfam said that by the following year, 1% of the richest people worldwide will control over 50% of the world’s wealth.

What are the consequences of such inequality and concentration of wealth? According to Ricard and the International Monetary Fund, income inequality “slows growth and triggers financial crises.” Quoting directly from the IMF summary report (See IMF, 2015): “We find that increasing the income share of the poor and the middle class actually increases growth while a rising income share of the top 20 percent results in lower growth—that is, when the rich get richer, benefits do not trickle down…” as opposed to what many Republicans claim. Instead, concentrating wealth undermines the economy. For example, one million people with a decent income will buy more products and stimulate the economy more than one person with a billion dollars—unless he or she gives it all away to public schools or spends it on improving mass transit or such, or starts a worker managed business, for example, where the workers get a fair share of the income created and the climate isn’t undermined by its products.

The Citizens United decision, the worsening political situation in the US, as illustrated by 8 years of Republican Congressional refusal to compromise during the Obama administration, and the election by less than 26% of eligible voters of this Republican President (only 52% voted and Mr. T. received less than half of those), are all direct results of increasing the concentration of wealth in fewer and fewer hands. Mr. T is trying even now to reduce even further the input of Democrats and any who oppose him. When was the last moment in American history that the vast majority of citizens were so excluded from the formal political process? Was it before the 19th amendment was passed granting women’s suffrage? Or was it before the civil war, before the 13th amendment was passed ending slavery? Or was it before the revolution, when the colonies were ruled by a monarch? Is this the time of greatness the Republicans say they yearn for?

The price the US pays for this inequality is immense. Ricard provides data from scientific research and several international organizations, including the UN, which show that “for each health care or social indicator (physical health, mental health, school success rates, …obesity, drug addiction…infant mortality, and the well-being of children in general) the results are significantly worse in countries where inequality is highest.”

Is it any wonder that there can’t be a democracy if 1% of the people own so much of the wealth? The rich can buy power, occupy the media, and intervene in the judiciary. Just look at Betsy DeVos, who contributed thousands to the coffers of Republican Senators—but did those Senators who were paid by DeVos recuse themselves, or were even asked by fellow Senators to recuse themselves, from voting for her nomination to Education Secretary? Conservatives argue that the rich have the freedom to use their wealth. But what happens when one person’s freedom prohibits that of another, or of many, many others?

For too many people, the acquisition of wealth is fast becoming the primary value of life. Other people are no longer thought of as fellow breathing, feeling beings; other species and the world itself⏤all are thusly reduced to being valued only in terms of the wealth they can be used to produce. Compassion, respect—these just interfere with what’s “truly important.” Long term or big picture issues—not important except to the degree they guarantee increased wealth. This is the third area of concern, our sense of a shared humanity and a judiciary that could preserve equity and justice in the law.

It is mainly for this reason people feel threatened, Democrat or Republican, Leftist or Conservative. So many of us value family, love, companionship, compassion, fairness, the beauty of the earth, a sense of meaning in life, maybe a sense of a spiritual or religious dimension. The importance of all these values is now threatened. The acquisition of immense wealth is becoming the religion of the rich, turning the rich into a great threat to the lives of the vast majority of Americans, and to the overwhelming majority of people worldwide.

Like8 After the vote, we listen. We watch, and we breathe.   We know this has been an intensely stressful time, stressful few months, stressful 6 years. We know so much is at stake.   We face the chaos of listening to changing numbers on the news, the mad attempt to know before we can…

Like8 Bob Dylan’s song, the “Masters of War,” has been in my mind lately, about the “masters” who do nothing but destroy and create unspeakable fears, the worst fear being to bring children to life⎼ or to love.   Since 2011 or so, levels of fear and anxiety have been increasing in this country and…

Like8 Why were two Supreme Court decisions made public just after the fifth hearing of the Jan. 6 Committee? One decision protected the rights of gun owners to openly carry weapons in public. The other took away a woman’s right to bodily autonomy.   Were these decisions made public now to divert the media away…

Like8 Imagine this. It’s 9:10 pm. You’ve been getting calls. Disturbing, threatening ones. Calling you “dirty… disgusting.” Accusing you of crimes against your nation, against the leader, or ex-President or whatever. Or of being a paid agent. They call the authorities to arrest you. They threaten you and everyone you love. You are Black. Latinx.…