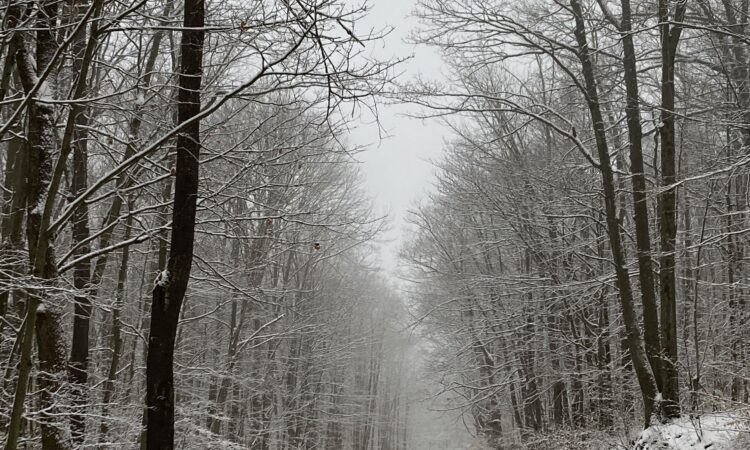 I was walking down our rural road yesterday afternoon, just approaching a pine forest, and I heard the trees shake, then a gentle boom in the air, and looked up to see the white-tan underside of a huge bird, a snowy owl maybe, fly about 40 feet over my head.

And today, while walking I remembered and looked around for that bird. And I thought of asking my neighbor, who knows a great deal more than I do about the local animal population, what kind of bird it might be. Just a minute later, off to the side of the road, was the neighbor. He lived nearby and was removing old tires and other garbage people had thrown there. I greeted him, told him about the bird and asked if he thought it had been an owl.

He wasn’t sure. Owls, he said, are usually silent. Eagles change colors for the first four years of their lives, and there are increasing numbers in the area, so maybe it was a young eagle. And after I thanked him and left, I felt grateful for my neighbor, and realized how wonderful and weird it was that I had thought of him, and suddenly there he stood.

When I returned home, I started thinking about coincidences.

Zen teacher Thich Nhat Hanh used the term inter-being to explain the Buddhist teaching on interdependence. We all inter-are, in the sense that without the air, what could I breathe? Without the solidity of the earth, what could I walk on? Without the fertile soil, what food could grow? Without other people, would I know who I was? Thich Nhat Hanh said if we look at a sheet of paper, we can see a cloud in it, sunshine, rain, the tree that supplied the pulp for the paper, the loggers who cut the tree, the bread they ate that day, the wheat that went into the bread, the logger’s partner, their children, and finally ourselves.

And then, from the bookshelf next to where I was sitting, I picked up Devotions, a collection of poems by Mary Oliver. I randomly opened the book to a poem titled, “Some Questions You Might Ask.” The poem starts with the line, “Is the soul solid, like iron?” And later, “Who has it, and who doesn’t?” Does an anteater have a soul, she asked, a camel, or maple tree? A blue iris? A rose, lemon, or the grass?

Or the world itself? And I thought of my cats—and I felt such closeness to them. But do they have a soul, whatever that is? Do they feel they’re connected to the quiet underbelly of everything? And is that quiet underbelly soul?…

To read the whole article, please click on this link to The Good Men Project. Enjoy.

Next ArticleText A Friend Today to Save Voting Rights